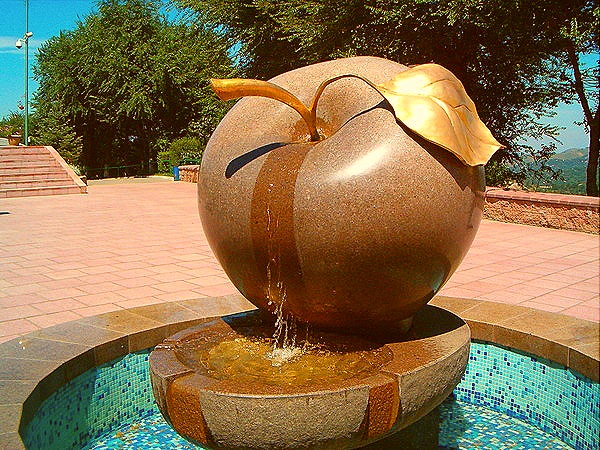 Almaty is the largest city, trade and economic center of Kazakhstan. The population is more than 1 147 000 people. Firstly Almaty was called Alma-Ata, Zailiysky and Vierny.
Almaty city is translated from the Kazakh language as “father of apples”, it is the perfect place for fruit growing, as there are many fertile lands around Almaty. Due to its location at the foot of the Tian-Shan Mountains Almaty was known as one of the most beautiful cities of the former SSSR.
Flora and fauna of Zailiysky Alatau is rich and diverse. The environs of Almaty are the parts of Ili Alatau national park, on the territory of which there are nature wildlife preserves.  Many rare birds and animals, living here, are put down in the Red Book of Kazakhstan. Among them there is a leopard or ounce, today it is the symbol of the emblem of Almaty.
At the moment Almaty is the scientific, cultural, historical, manufacturing and financial center of the country. The National Bank of Kazakhstan and some embassies stay in Almaty for the present, the rest governmental institutions are transferred to Astana. On the 1st of July, 1998 the Law about the special status of the city was passed. Almaty is unofficially called “South capital”.
The city is multiethnic: the Kazakhs, (50,5 %), Russian (33,2 %), Uighurs (5,8 %), also Tatars (2 %), Koreans (2 %); Germans, Ukrainians and others (10 %). The largest number among foreigners, working in Almaty, are the Turks. Despite its small age, the demographic processes in the city are complicated and diverse, that is largely a reflection of its variegated ethnic composition. The characteristic feature of the modern city is its cosmopolitan and multilingual features. The Russian and Kazakh languages are widely spoken in the city.

Architecture and sightseeing
Almaty is sunny, cozy, buried in verdure city with wide streets, beautiful buildings, numerous parks, public gardens and fountains. The luxuriant green attire and the magnificent panorama of the mountains make Almaty unlike other cities. Today there are more than 120 fountains, 61 of them are in the communal property. The fountains with the multibranch channel network play the biggest role for Almaty, together they form the single complex of ponds and streams of the city.

The Ascension Cathedral
The Ascension Cathedral  in Almaty is the unique engineering  earthquake-proof construction of 56 meters height, built by the architect K.A. Borisoglebsky and the engineer A.P. Zenkov in 1907. The Cathedral was built from blue Tian-Shan spruce according to the project of Pavel Gurde.
A.P. Zenkov  created new methods of building in earthquake dangerous zones, thanks to which in 1911 the Cathedral stood the power of the earthquake of 10 points.
The walls of the church were painted by the local artist N. Khludov. During the Soviet period there was the local history museum in this building. In May, 1995 the building was passed to Akmaty and Semipalatinsk eparchy of The Russian Orthodox Church. In 1997 after two years of restoration works the religious service was resumed in the church.
There is a widespread opinion that the church was built without any nail, but it is a myth.

TV tower
The TV tower is located on the Kok-Tyube top at an altitude of 1000 meters above sea level. It is the highest construction in Almaty. Its height is almost 372 meters, 1130 meters - above sea level. The base of the tower is a ferroconcrete foundation in the form of the three-storeyed sectional basement. The body of the tower is the metallic stepped dioctahedron of diameter of 18 meters at the base, 13 and 9 meters in the maintenance service locations at a height of146 and 252 meters. The tower was built taking into account the highlands and it can stand the earthquake till 10 points. The TV tower is a complex of radio and television transmitting station, and it is an inaccessible place for the excursions. The tower is visible almost from any point of the city, because it is illuminated with power searchlights in the dark.

The sports complex "Medeo" was built in 1972 in the gorge of the same name 15 kilometers from the city. "Medeo" was called “factory of records”, because 126 of world records had been established on the high-mountain skating rink for 33 years. The unique feature of the skating-rink, which is located at a height of 1700 meters, is that it is situated in the rarefied air and has the high quality of ice. It is possible due to pure mountain water without admixtures of salt. Above the sports complex the antimud slide protection dam and the ski resort "Chimbulak" are located. In the 90s of the XX century the sport complex "Medeo" was the place for international music festival Voice of Asia (Asia Dauisy). Now the complex "Medeo" and the high-mountain ski center "Chimbulak" are reconstructed.
There are many monuments of various historical statesmen in the city.

Sports
In 2011 Almaty got the right for holding winter Asian games. The whole ensemble of modern arenas for winter Asian games was built in Almaty. They are: ice stadium with 400 meters track, ski and biathlon stadiums, a new ski resort, 90 - and 120-meter springboards with stands for 20,000 spectators, bobsleigh track.