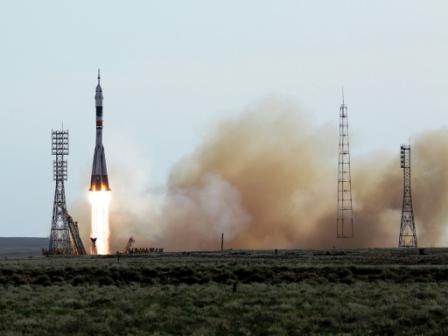 The Baikonur Cosmodrome is the first largest cosmodrome in the world, located on the territory of Kazakhstan, not far from Tyuratam village. The area is 6717 square kilometers.
The Baikonur Cosmodrome has a great international significance. The launches of different kinds of carrier rockets are implemented from the space centre. It is one of three cosmodromes of the planet along with the space canters Cape Canaveral (USA) and Jiuquan Satellite Launch Center (China), which is for launching rockets with the cosmonauts on the board. International Space Station was selected taking into account the Baikonur latitude, main space shots were planned (and organized) from it.
Baikonur began to build in February 12, 1955 (The Order of the Government of the USSR on the construction of the landfill for testing intercontinental ballistic missiles adopted in February 12, 1955), it became the cosmodrome in 1957. In the 1970s and 80s it was a major Soviet Cosmodrome. After the collapse of the Soviet Union in the early 1990s the cosmodrome went to Kazakhstan. The Baikonur Cosmodrome will be leased by Russia until 2050.
The launch of the first man-made Earth satellite and the first flight of a man into space were realized from the Baikonur Cosmodrome; manned spacecrafts "Vostok", “Voskhod”,  "Soyuz", orbital stations "Salyut", "Mir", the multiuse system " Energia" - "Buran", interplanetary spacecrafts and artificial satellites were launched.
More than 50 % of annual quantity of launching spacecrafts of Russia is produced in the Cosmodrome; more than 80 % of pay loads on the total weight, including 100% of launches into the geostationary orbit.
In 2009 24 launches of rocket boosters were fulfilled (it is more than from all cosmodromes of the USA), it is 75 % of Russian launches for a year and 32 % of the worldwide amount. It was planning to make 42 launches in 2010 (in fact, about 30 launches were probably implemented).

The territory of the cosmodrome is a hill plain, that is crossed from the east to the west with the Syrdarya river in the south part. There are drainless hollows on the whole territory of Baikonur, the hollows are taken with the alkaline lands or takyrs; during the snowmelt and rains the saline and takyrs become sodden. On the territory of Baikonur there are small areas of fixed hilly sands of 2 – 10 meters high.
The floral zone is a sagebrush-boyalych (north) desert.  The soils are brown desert-steppe, on the banks of the river in some places they are gray-brown and alluvial. In the floodplain of the river and the islands there are thickets of thorny shrubs and trees of 3-7 meters high (tugai), there are also areas of meadow vegetation, in some places rush up to 4 m. grows. The desert vegetation consists of shrubs (tamarisk, calligonum) up to 2 m., half-shrubs (boyalych, anabasis salsa, wormwood) up to 0.5 m. and herbs (camel's-thorn - zhantak). Grass cover is lighted, it can be green only in the spring, in the beginning of June the grass is faded. The Baikonur steppes are the motherland of well-known tulips.
The city and dwelling and industrial areas of the cosmodrome are planted with trees and shrubs, although the herbage is insignificant, there is a great deal of trees (elm, poplar, ash, dzhida, tamarisk) of 3 – 10 meters high.
The climate is sharply continental, there is little precipitation (120 mm. a year), there are many sunny days; the summer is long and hot, the winter is cold and windy (snow cover is low).