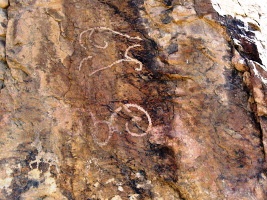 Tamgaly-Tas is located near the river Ili in 120 km. to the North from Almaty on the way to Bakanas.
Tamgaly-Tas is translated from Kazakh “stones with signs” or “images (petroglyphs) on the stones”, and in public they are more known as “written rocks”. On the right shore of the river Ili there about 1000 of different rock paintings that date from the late Middle Ages. They are petroglyphs , images of idols, Buddhist notes, among which the most interesting paintings are three Buddhist idols. Under the drawings the sacred text in Sanskrit, dating from the XII century is carved: “Om mane padmehum” (“snow jewel in the lotus” or “Blessed be the born from a lotus”). The inscriptions on the rocks are on the Tibetan and Kalmyk languages. 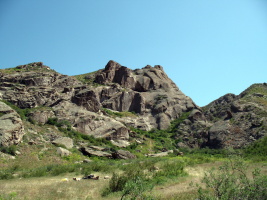 There is a legend that in X century, when one of the Buddhist missions stopped on the river bank Ili during the march to Semirechye, there was an earthquake and a large rock piece fell on the earth. This incident was considered as a sign of necessary return to India. They cut three images of Buddha on the rock piece. One can see other pictures of Buddha on the adjoining rocks.
According to another legend the inscriptions were written by the Kalmyks in “todorkhoy nomyn bichig” (“clear literary script”), that was created by Zaya Pandita Ogtorguyna in 1648 and was used more than three centuries by the Mongols, who carved the images of Buddha.


Other sights of Almaty region