Central State Museum of the Republic of Kazakhstan 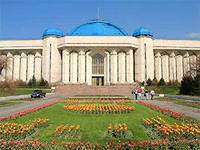 Central State Museum of the Republic of Kazakhstan is one of the largest and oldest museums in Central Asia. "Muzeum of Orenburg region" was organized in Orenburg in the 30 years of ХIХ century. One of the organizers was a famous linguist Vladimir Dahl.
In 1931, the museum was opened in Alma-Ata, in a beautiful building of the former Cathedral. It is a unique architectural structure built in 1904-1907 by architect A. Zenkov, was one of the few buildings that survived the massive earthquake in 1911.
In 1985 a new modern museum building was built by the architects Yu.Ratushny, Z. Mustafina, B. Rzgaliev. Total area is 17 557 square metres. There are art galleries and 4 exhibition halls in three-storied building. The museum publishes collections of studies, devoted to the history of Kazakhstan and Museology.
Today the Central State Museum of Kazakhstan includes more than two hundred thousand exhibits. The first exposition hall consists of two sections – archeology and paleontology. The paleontology hall presents fragments of fossilized trees, insects and fish prints. Some of the exhibits are more than one million years. Another section of the exhibition includes ancient objects found in archaeological expeditions in Kazakhstan, thanks to it, you can get acquainted with the ancient history of the country. Here are the ancient gold objects, reconstruction of burial structures and outbuildings, as well as other valuable archaeological finds.


Other sights of Almaty