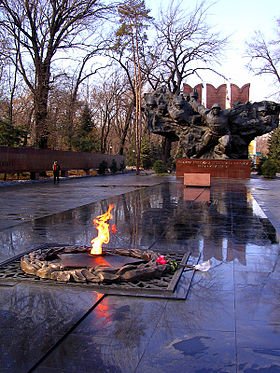 The formation of Almaty city, its culture has century-long traditions. There are several periods in the development of the architectural style of Almaty. Every subsequent period inherited from the previous one the results of the material activity, indicating about spirit, tastes, way of life, economical and technical opportunities, and needs of the epoch that reflected and continue to reflect on the unusual architecture of the city.
In this unique city there is a great deal of sights, which attract tourists.

Park of 28 Panfilov Heroes. It is located not far from the hotel “Otrar”. This park is famous for the memorial of glory, Eternal Flame and Memorial Alley. In this alley there are 28 granite monuments with the names of Panfilov Heroes, who died during the battle of Moscow during the World War II. 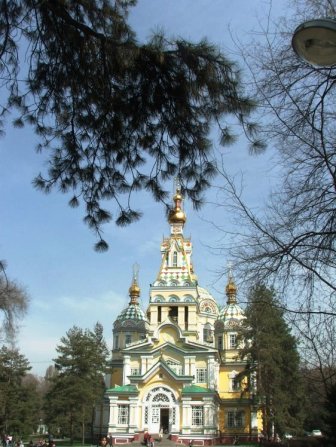 Ascension Cathedral in Almaty is the unique engineering earthquake-proof construction of 56 meters height, built by the architect K.A. Borisoglebsky and the engineer A.P. Zenkov in 1907. The Cathedral was built from blue Tian-Shan spruce according to the project of Pavel Gurde.
A.P. Zenkov created new methods of building in earthquake dangerous zones, thanks to which in 1911 the Cathedral stood the power of the earthquake of 10 points.
The walls of the church were painted by the local artist N. Khludov. During the Soviet period there was the local history museum in this building. In May, 1995 the building was passed to Akmaty and Semipalatinsk eparchy of The Russian Orthodox Church. In 1997 after two years of restoration works the religious service was resumed in the church.

The central mosque is a grandiose construction, the largest in Kazakhstan.  The magnificent building is decorated with marble and colored tiles made in the Kazakh national motives. On the top of the mosque there is a blue dome of diameter 20 m., and high 36 m. The high of the big minaret is 47 m. The mosque was built in July, 1999.

State museum in Almaty. This museum is especially attractive due to the collections of Kasteev A. There are also Kazakh instruments of a big collection. One should visit the museum of gold, where there are big collections of golden decorations and precious metals.

Monument of the legendary group “The Beatles”. The monument represents the Liverpool quartet in full force.

Republic Square is the main square of the city; it is also the place of holding festivals, events, sport holidays, parades and festivities.

Monument of independence is the monument of the Republic history. The complex reflects the chronicle of Kazakhstan from the times of Saks Princess Tomiris and till today time. In the center of the complex there is a symbol of independence – Golden soldier.

State Academic Opera and Ballet Theatre after Abay was built in 1941. It is the most beautiful construction in the style of the Italian classical architecture with the elements of the Eastern colour. The traditions of the classical Kazakh heritage are in the base of the architecture.

Republic Palace is the main concert square in Kazakhstan. It is the huge construction with the original architecture, whole complex of adjoining constructions, parks and fountains, Abay square.

The TV tower is located on the Kok-Tyube top at an altitude of 1000 meters above sea level. It is the highest construction in Almaty. Its height is almost 372 meters. The tower was built taking into account the highlands and it can stand the earthquake till 10 points. The TV tower is a complex of radio and television transmitting station, and it is an inaccessible place for the excursions. The tower is visible almost from any point of the city, because it is illuminated with power searchlights in the dark. 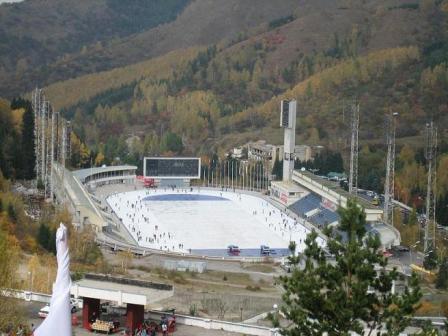 Kok-Tyube is a hill place that borders on Almaty in the South. Kok-Tyube height is 1070 meters. On the top there is an observation area. Kok-Tyube is the best place for watching the night city. It is possible to get Kok-Tyube on the cable road.

In the mountain suburbs of Almaty the scientific station for studying the Sun and cosmic rays, astrophysical observatories in Kamensk plateau and Assy pass, sports complexes in the ice stadium Medeo, skiing station Chimbulak, alpine and tourist camps, resorts, vacation houses and camping were built.


Other sights of Almaty