Aisha Bibi mausoleum of the XII century, situated in the village Aisha Bibi of Jambyl region in 18 kilometers from Taraz town is the architectural monument of the Republic significance.
The foundation of the mausoleum is cubic. The massive columns are set in four corners. Small niches, small columns, arches, lancet arches, terracotta facing tile were used in decoration. In the patterns of the mausoleum the traditional kinds of ornamental art of ancient Kazakh tribes harmonize. They include the geometrical zoomorphic and solaris motives that go back to the art of Andron and Saks tribes.
The first researcher of the mausoleum in 1893 was Russian archeologist Vasiliy Bartold. In 1960 the protection glass dome for the protection of the mausoleum was constructed, and it was used for observing and tourist aims. In 2002 Nishan Rameto was employed for restoration of the architectural monument and construction of the park around it.
The mausoleum is a centric, square construction. The entrance is in the eastern part. The corners of the mausoleum were formed by the three-quarter columns. In the center of the construction there is a gravestone. The walls of the mausoleum of 80 cm thick are of three parts: inner – of breaks, outside – of slabs with carved patterns, and the place in the middle of the wall, backing with clay and fragments of defective slabs. In the walls there are fir beams for the firm joint of walls and columns. 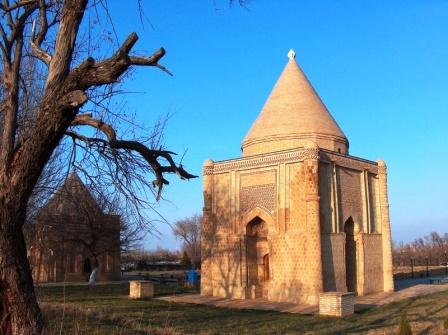 Outside the walls of the mausoleum are fully decorated with carved terracotta slabs, which are fixed with help of wedges, situated on the back side. In the ornamentation there are more than 60 kinds of patterns.
There are no authentic facts about the construction of the mausoleum. However there is the Kazakh legend about love of Aisha Bibi to her bridegroom.
There are 28 different versions of this legend. According to the most widespread one, beautiful Aisha was the daughter of the famous rich man – Khakim-Ata. He was known as Zengy baba, follower of Akhmed Yassaui. Karakhan fell in love with 16 years old Aisha at first sight. Wonderful Aisha also fell in love with Karakhan. Aisha’s father refused to give in marriage his daughter to Karakhan, who whether was a khan, but not so famous. The sad man went away home, now it is the lands of modern Taraz. Aisha warned her mother Anuar, but did not get blessing from her father, she left home.
“You will ford six rivers, but will not ford the seventh one”, - called father after Aisha. Aisha forded six rivers. She stopped before the seventh river, remembering the spell of her father.
Father's curse had come true. Snake bite, crawled out of the stone, proved fatal. Dead beauty Aisha-Bibi was buried on this place. The guardian of the tomb became her inseparable nurse, friend - Babadja khatun.
Devotion to her mistress knew no bounds. So when Babadja died, she was buried nearby. Karakhan arrived too late. Shocked and heartbroken Karakhan ordered to erect on the grave of his beloved beautiful a mausoleum, thus having inscribed the name of Aisha in eternity. 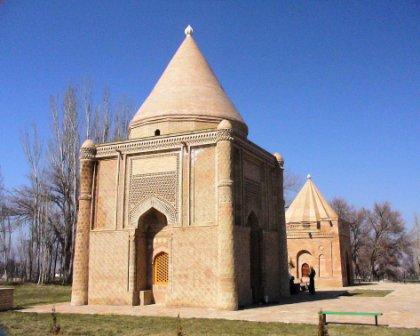 People tell that Karakhan lived a long life. He had several wives, but their names are unknown. When Karakhan was dying, he ordered to bury him in such a place, from which the mausoleum of Aisha could be seen.
For ten centuries the mausoleum of Karakhan and Aisha Bibi has been the highest building in Taraz.
The mausoleum itself looks very light and elegant. More than eight centuries it has been standing in spite of winds and bad weather, as a witness to the great love.
Today women come to the mausoleum and ask for marital happiness and motherhood. All brides, who visited this place, tell that they felt the uncommon influence of that aura, which is reflected from the carved walls of the mausoleum. As the legend tells, in ancient times sounds and voices in this building re-echoed at a distance of 50 – 100 meters.
It is considered that those who visit the mausoleum of “eternal bride” on wedding day will live together for a long time and will be happy. The newlyweds of Taraz and from nearest regions always visit the mausoleum on wedding day, as if they dropping a line from each other.


Other sights of Jambyl region