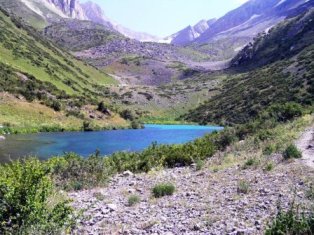 Sairam-Su is one of the most beautiful and picturesque gorges in Kazakhstan. There is a lake of the same name at an altitude of 2,350 meters. The water on one side is turquoise, on the other one is light blue. It is noteworthy that these colors are clearly seen at any time of year.
According to legend, in ancient times a tribe lived in the mountains. Daughter of the chief of this tribe fell in love with the boy-shepherd. When they asked father's blessing, he was angry and asked to do her duty and be a wife rich khan. Then the lovers decided to escape, received blessings from her grandmother, who gave her a turquoise ring and bracelet. She told her to use it only in extreme cases.
But angry father caught up disobedient daughter. Realizing that they could not escape from his pursuers, the lovers embraced and vowed always to be together. When she dropped to the ground turquoise ring, there was appeared a lake of malachite color. Then she took off her bracelet and threw it in front, there was a new lake in the form of eight symbolizing infinity. Since that time the lake of turquoise color (girls) and light blue (boys) are connected forever.


Other sights of Shymkent