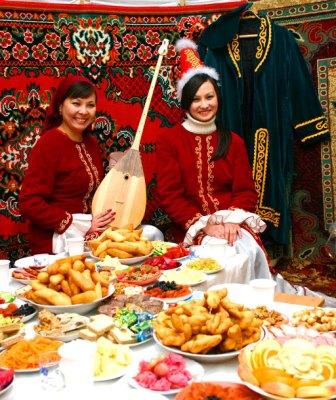 The characteristic feature of the Kazakh cuisine is a wide usage of meat, milk and farinaceous foods. In summer almost in every Kazakh family ayran is cooked, it is a sour milk diluted with water. It is drunk as a freshener, and various cereals pottages are seasoned with it. Kurt and irimshik are made of ayran. Kurt is a cottage cheese in the form of rolls and dried in the sun, and irimshik is a fat crumbly cottage cheese. The Kazakhs add milk or cream to the strong tea. Kumys is a favorite drink, which is famous for its medicinal feature. Kumys is a soured mare's milk. Shubat is cooked to the same way as kumys, but it is cooked from the camel milk.
In winter the Kazakhs mainly eat meat food. The dishes are mainly cooked from mutton. But other kinds of meat are also used, they are beef, horse meat, goat's meat and game.
The most widespread dish is beshbarmak – welded in the bouillon mutton and slices of rolled out pastry. Beshbarmak is translated as “five fingers”. This meal is named such a way, because it is eaten with fingers. A big dish with beshbarmak is set in the middle of the table. The meat is served with bones. The meat is cut and served out to the guests. Beshbarmak is washed down with sorpa – a strong bouillon, which is served in big soup bowls. 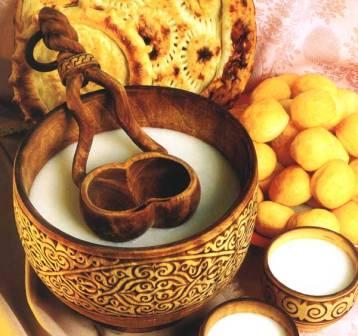 During the toy (festival) and for the banquets meat is cut in a special way. The mutton is taken apart without cutting on different culinary parts – janbae (upper part of the back leg), ortan-jilik (middle part of the leg), bel-deme or bel-omurtka (kidney part from the pelvic bone to the first vertebra with ribs), kabyrga (5, 6, 7 and 8 ribs of the brisket from the kidney part) and others. There are 22 of such parts.
For the banquet or on a special order the mutton head is served additionally on the separate dish. At first the head is singed above the burning embers. The cookers do it carefully not to blow the skin, then they cut the horns, clean and wash the skin. After this they part the head to the upper and lower jaws, extract teeth and make puncture in the cheeks. Then they simmer the head for 3 – 4 hours. In order the head would not broken, it is wrapped up in a towel.
The right to dress the head of the sheep is given to the most honorable guest, who cut ears and serve them to young men. The girls get palate. After this the honorable guest cut small pieces from the head and hand them round to all sitting at the table, and then the head is moved from one guest to another. 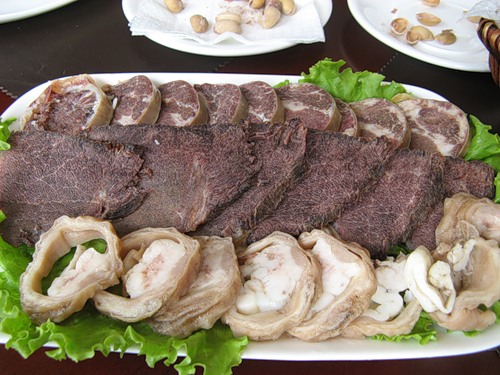 Besides beshbarmak kuyrdyk is very popular. It is a roast of liver, lung and meat with potatoes. Badyr kuyryk is a cold snack. For its cooking, the cut liver is boiled with the fatty suet.
The Kazakh often cook baursaks from flour. Baursaks are pieces of sour pastry, fried if the fat. The flats are baked from sour and unleavened dough.
Tandirs – antique stoves remained in many regions of Kazakhstan. Flats and somsa are cooked in these tandirs.
More than 100 of nations live in Kazakhstan. Many of them have their favorite dishes.  However, such dishes as palov, dungan noodle soup, manti – big pelmens, by right can be named the Kazakh national dishes. They are cooked in the restaurants, dining rooms and tea rooms (chaikhana). 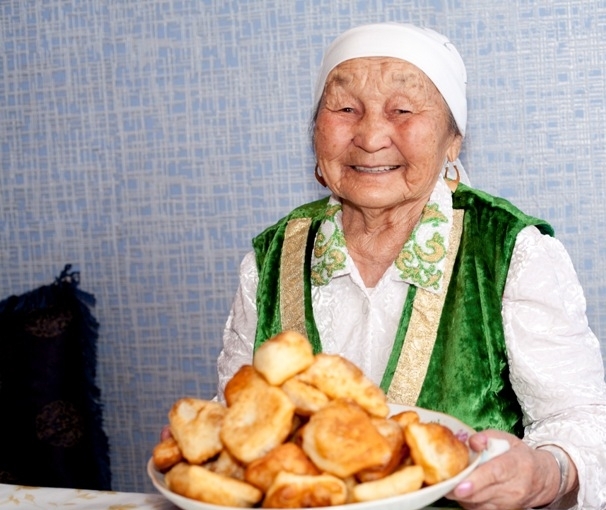 The Kazakh cuisine, keeping its specific features, considerably modified them, taking into account new culinary and technological requirements. At the same time for cooking and serving separate dishes as before the national kitchen utensils are used. So, manti are steamed in kaskans – special big wooden or metal fenders, soup is served in kese – ceramic big cups without handles, tea is served in pialas.
Speaking of the Kazakh national dishes, we cannot mention also the popular sausage - kazi, shuzhuke, karte. They are cooked from horse meat in various ways, smoked and boiled-smoked way.